What Was the First Game You Ever Played? 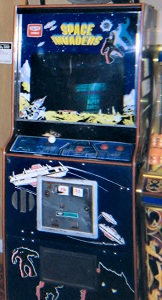 Can you remember? I’m not 100% sure and I’m going to sound like Methuselah here but I think it was probably Pong. My Grandad had an old Atari console with Pong on it, the simplest game to encapsulate that multiplayer thrill of ecstatic gloating in victory or potentially violent anger in defeat. That simple gameplay mechanic actually spawned a load of Pong sequels, spin-offs and then reached its zenith with Arkanoid which I was chronically addicted to as well.

The other early games I remember playing in the arcade, pre rubber key spectrum days and long before Nintendo and Sega, were Space Invaders, Pac-Man and Star Wars. Everyone knows Space Invaders and it remains awesomely addictive. It was also the only game to have its own brand of pickled onion flavoured crisps (chips for Americans) as a spin-off. Pac-Man was everywhere and it remains super addictive too, although the old arcade classics that used to eat up those ten pence pieces in return for a few seconds of gameplay are all free browser games now.

The Star Wars arcade game came out in 1983 and it was a booth with x-wing controls and authentic sound FX. I spent a whole summer and all my pocket money trying to destroy the Death Star. The vector graphics look kind of laughable now, but that game was awesome at the time.

The first home computer we got was the Vic 20 and I used to play a game called Blitz nonstop. You were piloting a bomber that swept across the screen left to right then right to left getting lower with every pass. You had one control – the space bar, and you had to bomb the skyscrapers down to rubble in order to land your plane safely or you’d end up crashing into one. If you made it to the landing the pilot would jump out and wave to you.

5 responses to “What Was the First Game You Ever Played?”