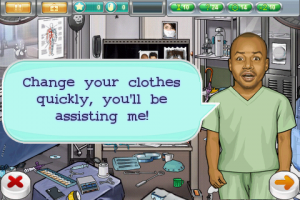 Scrubs ran for nine seasons from 2001 to 2010. It was a wacky comedy with a hint of drama. Set in Sacred Heart hospital it followed the trials and tribulations of John Dorian as he embarked on a career as a doctor. There were various other regular characters, friends, colleagues and even enemies, most memorably J.D.’s mentor Dr. Cox and his nemesis the Janitor. It was a decent comedy show that ran out of steam towards the end and you’d be forgiven for thinking that it isn’t the best basis for a game.

Well Herocraft don’t agree and they’ve gone ahead and released an Android game called Scrubs. So what’s the deal? It’s basically a collection of casual puzzles and mini-games set in familiar environments from the show and starring all of your favourite Scrubs characters.

The main focus is hidden object games. You have a busy environment full of random objects and you have to find specific items and tap on them before you run out of time. There is some interactivity in the environments to add a little something and you get the usual array of hints to help you through. If you like hidden object games then this will suit you well. The only element that doesn’t work is when it switches to silhouettes because the items are not always easy to identify. Sometimes you’ll have to use an object on something else in order to reveal the item you’re looking for. It’s a small touch but at least it adds a little variety to the repetitive gameplay. 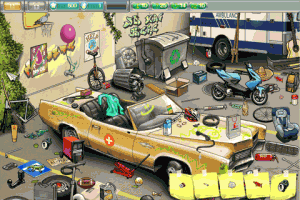 There are also a few mini-games such as zooming down a hallway in a wheelchair trying to avoid crashing into people and some tile matching challenges. None of it is very taxing so this should be suitable for the most casual of gamers.

The art style is quite nice and the cartoon versions of the characters are all easily recognisable for fans. There is some attempt to inject the humour of the show but the comic book style links between puzzles with speech bubble text don’t quite hit the mark. There’s also no authentic sound. The theme tune or maybe the odd voiceover would have really elevated this and made it appealing for fans.

In the end this is a pretty typical hidden object game with a few forgettable mini-games thrown in on top and a thin Scrubs overlay. It isn’t as good as Musaic Box, another Android release from Herocraft that combines musical puzzles with hidden object gameplay and it doesn’t have the addictive hook of The Enchanted Kingdom. If you’re a big fan of these casual Android games or you’re a Scrubs fanatic who misses the show then it’s probably worth shelling out $1.99 or £1.29 for.