Thinking about the first game I ever played conjured up loads of memories of old titles that were awesomely addictive at the time. I’ve owned loads of different computers and consoles over the years and played hundreds, maybe thousands, of games. In Games of Yesteryear we’ll take a look at the games that inked themselves indelibly on my brain – the ones that conjured sustained periods of dangerously obsessive gaming.

We’ll kick off with the best ZX Spectrum games but I’ll cover other systems in future articles. This is my top ten ZX Spectrum games in no particular order. I’m sure I’ve missed some classics; these are just the ones I played. If you loved any others post a comment and tell us why. 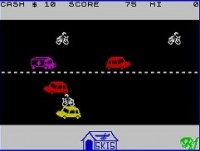 I think this came with the Spectrum when we got it. It’s certainly the first game I remember playing on it. The first part was basically a Frogger clone. You had to cross a busy road to get your skis and then go back across without getting flattened. If you managed that then it was off to the slopes where you had to try and slalom between flags and avoid crashing into trees. This was fast-paced and accessible for anyone.

My long term obsession with Football Manager games began back in 1982. It was mostly text with some spiffy graphics for matches as you can see. You had to choose the team, sign players, balance the books and work your way from the 4th to the 1st division. You could compete in the FA Cup as well. I forgot this existed until I saw the cover with the bearded smiling mug of Kevin Toms (the designer) on it – that’s something you just never forget. I’ve never managed to shake my addiction to football management sims and this is where it started. 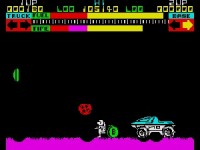 This astronaut adventure built upon Jetpac. It cast you as Jetman and charged you with defending humanity from the aliens. You were basically exploring a small moon in your rover, shooting aliens and blowing up alien bases whenever you found them. You could also build bridges to get across craters and use your jetpac for short bursts of flying. There was a time limit you had to beat for destroying each base or it was lights out. It was best to stay in the rover as much as possible but you had to venture out at times and that made for challenging and varied gameplay. 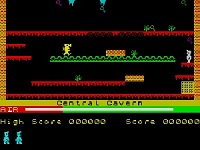 The platform genre owes a debt to this classic. Not only did it look great (for a Spectrum game at the time) it also had music. You basically had to guide the manic miner, Willy, to collect the flashing objects in 20 caverns without touching any enemies or falling too far. It was seriously tough and required you to learn the enemy movement patterns and time your jumps to perfection. Frustrating fun while it lasted which was a surprisingly long time despite the limited number of levels because it was so hard. 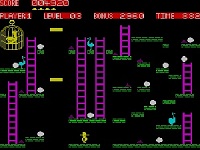 Another classic platform game that proved incredibly popular, Chuckie Egg cast you as Hen House Harry and you had to collect a dozen eggs in each level before the timer hit zero. You had to avoid hens and in later levels you’d be chased by a speedy duck. There were really only 8 levels but you played through them multiple times. It was all about timing your runs up and down ladders and making best use of the elevator platforms. 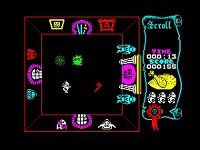 I was so addicted to Atic Atac. You were basically trapped in a big spooky castle with a range of bizarre ghouls and you had to explore to find food, keys and other items with the ultimate aim of escaping by piecing together the big front door key. You could choose from three characters each with access to their own secret passage that the others couldn’t use. There was the wizard, serf and knight. It was possible to starve, you had a roast chicken that used to melt away on the HUD to display your hunger and obviously if you touched any enemies you were a goner. It’s funny I remember playing this for hours on end but I just watched a walkthrough and the guy completes it in 5 minutes 46 seconds! There’s no doubt the British TV show Knightmare borrowed from this. 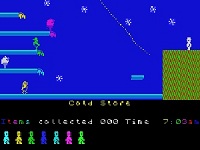 The follow up to Manic Miner was set in a seriously warped mansion and offered 60 levels of platform gaming genius. It was incredibly addictive and very tough. Once again the slightest touch from an enemy would cost you a life and an ill judged jump would also send you to your doom. You had to collect the full set of flashing objects to win but few people were capable of the timing perfection required. I certainly never managed it. 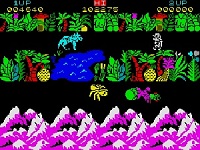 Prowling the jungle in search of the pieces of an amulet was your aim as Sabreman in this classic maze adventure. You had to face off against the creatures of the undergrowth from spiders to rhinos to the big wulf itself. There were various pick-ups to help you along the way and your trusty sabre could be used to despatch most of the threats you encountered, although some were best avoided. There were even negative pick-ups that would reverse your controls or slow you down. 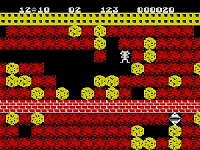 This was probably the game I played the most. You were the super miner, Rockford, in search of diamonds in the depths. A falling boulder or an unexpected firefly could spell an untimely demise and you had to plan your route carefully to get maximum diamonds and escape unscathed. You needed a certain number of diamonds to open a portal to the next level and you had to strategically drop rocks on enemies to kill them and create more diamonds to collect. Time limits put the pressure on in this addictive title and it was a clever combination of game mechanics that was satisfyingly challenging. 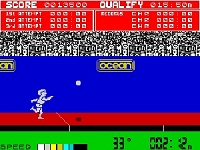 This was the game that claimed the lives of so many innocent joysticks. A combination of waggling controls for speed and a healthy dose of competition made this the game most likely to cause players to get carried away. It was great fun as a turn about multiplayer option and it had a nice variety of different events so everyone had a specialty.

If you want to add any others then post a comment. Next time I’ll take a look at Atari ST titles.