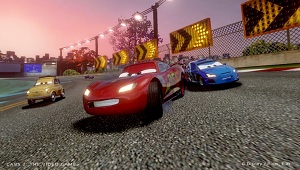 In an attempt to get some PS3 time in the face of a Dragon Age addicted wife and a two year-old son who’s either watching Spongebob Squarepants on Netflix or another Pixar Blu-ray I got Cars 2: The Videogame. It was a Christmas present for my son who is obsessed with Lightning McQueen and Mater. To those who would cynically suggest I got it so I could occasionally play something on my PS3 I’m shocked, appalled and even offended at the suggestion.

While it is generally true that movie tie-ins belong to the world of suck this one is actually extremely playable, well made and lots of fun. It would probably struggle to claim a place in the pantheon of awesome violent racers alongside Mario Kart, Wipeout and maybe Twisted Metal, but the influences are there and it will definitely do when you need something kiddy friendly.

If you haven’t seen the film it’s basically a spy thriller for kids. The real star of the show this time round is Mater, the rusty, hillbilly, tow truck as a kind of car who knew too little. He teams up with a Brit spy, voiced by Michael Caine, and they face off against an evil empire intent on ruining the World Grand Prix with races held in various locations around the globe. It provides a great backdrop for the game which lets you choose from a multitude of characters from the movies and train your way to super spy by taking part in races and battles in interesting locations.

You’ve got ten modes to choose from and it’s best enjoyed as a multiplayer experience. Although it does only offer up to four player local multiplayer (there’s no online option). There are straight races, battle races, survival challenges, hunter challenges and a couple of arena modes that play like deathmatch and capture the flag. The range of gameplay on offer is impressive.

If you embark on the single player then you’ll kick off with a handy tutorial that introduces you to the basics. You can build up turbo boost power by drifting, jumping and pulling off various airborne manoeuvres. You can also engage in a spot of backwards driving or hop onto two wheels. Once you have mastered the basics you can select different types of challenge in various locations and progress up the spy ladder to the upper echelons at your own pace. You’ll unlock more challenges, tracks and characters as you climb. 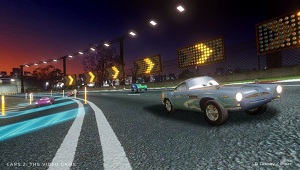 The tracks and arenas are littered with power-ups and weaponry, depending on the mode. They also offer nifty shortcuts and occasional hazards. The whole experience is a lot like Mario Kart and that’s reinforced by the cartoon art style which emulates the movies beautifully.

The controls are easy to master for any experienced race game fan but younger kids will take a while to get to grips with the tricks and drifting. In fact the overall difficulty level, especially for the straight races is pretty unforgiving. You get a bronze, silver or gold award for each level completed and you’ll be awarded XP accordingly that gradually boosts your spy level and gives you access to more content.

Art and sound-wise this is the Cars universe and so fans will be draw into it instantly. There isn’t much in the way of storyline but the cut scenes between levels are well-handled. Some of the big names from the cast don’t provide the voiceover here (I’m looking at you Owen Wilson and Michael Caine) but kids won’t detect the difference and everything from the menus to the environments and characters has an authentic feel. My son will actually ask me to put this on sometimes so he can watch it.

This is easily one of the best movie tie-ins I’ve played and if you don’t have a Nintendo in the house then it could keep those Mario Kart cravings at bay. If you have a Cars obsessed kid and you want something you can play with them that won’t drive you insane then snap it up – you won’t regret it.