I’ll never forget the day my parents bought me and my brothers an Atari ST. I was 11 years old. They sat us down together and told us they were getting a divorce. They patiently answered our anguished questions and then pulled out a big box as though it was some kind of consolation prize. A slice of gaming gold was waiting within.

It was a day of mixed emotions. I was delighted with the new computer, I was getting fed up with my ZX Spectrum in the face of all my Amiga owning friends, but I also felt guilty for being pleased because of their announcement. When I think back now, it was probably a fair trade. I got more enjoyment out of that Atari than I ever did from my parent’s marriage.

Over the next couple of years I was consumed by a wave of epic games, and some not so epic games that I mistakenly believed to be epic at the time. Until my brother got a NES a couple of years later the Atari ST was it. Here are the games I remember.

This was an excellent top-down scroller that cast you as a Rambo style nut case and challenged you to single-handedly take down an enemy army. Actually you could play co-op two player which made it a title of choice when mates were round. The action was relentless, there were some handy pick-ups along the way and you could even hop in tanks when you found them. It was actually inspired by Rambo II (Ikari was part of the title in Japan) and it was developed by SNK. I miss this game.

You played as Mervyn, a sorcerer’s apprentice who had been turned into a frog in this top down fantasy title. You had to explore a big dungeon using spells to defeat your enemies and solving the odd rune based puzzle. The labyrinth was blacked out until you entered a room so you were never certain what you’d get, there were all sorts of enemies from Fire Golems to Necromancers. I’m not sure if this was really any good, it was obviously inspired by Gauntlet, but I definitely played it a lot. 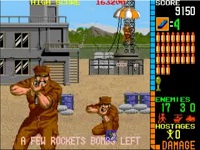 This was a favourite in the arcade because it had a gun you could use to despatch the waves of evil enemy soldiers. I was quick to snap it up when it came out for the Atari ST, even although it was never as much fun without the gun. It was a lot like the Arnie film Commando – a side scrolling, insane, suicide attack on a concentration camp to rescue some hostages.

This was a super addictive racing game where you had to drive a beach buggy round one of five courses. The aim was just to get the best time possible. Each of the five courses was divided into stages and you had to reach the gate before the time ran out in order to continue. You could also score extra points by hitting flags in the right order. There were plenty of obstacles to slow you down but you could use logs to jump them and you’d get extra points for being in the air or driving on two wheels. It had a great feeling of speed and it was seriously fun.

Another vertical scroller but this time you were piloting a transforming vehicle that could change into a plane or tank. Choosing when to change was part of the strategic challenge. You had to destroy a ton of gun towers and then face off against bosses and the levels got more complex as the game went on. It looked and sounded awesome, but it was damn tough to survive.

International Karate was the first fighting game that I ever got hooked on. The basic aim was to beat your opponent by getting six points first. It had a humorous feel to it with comical background animations and there were little bonus games between rounds. The fact you had three fighters on screen at once made it pretty unusual and you also had a good range of attack moves. It was pretty limited with one backdrop but the score was good and the gameplay was really addictive. 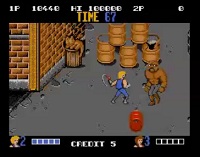 This was another arcade favourite that I got for the Atari ST as soon as it came out. Double Dragon was completely in tune with eighties buddy movies – two guys on a mission on the mean streets of punk-filled America to rescue their girl. It was a gratuitous beat ‘em up where you could punch, kick, knife, whip and even blow up an array of bizarre criminals. A two player co-op classic that never got old, until it eventually got old, but it was great while it lasted.

Back in the eighties before I learned the horrible truth about Tom Cruise or considered the realities of being a fighter pilot I had a Top Gun inspired obsession with the F-14 Tomcat and so After Burner was my favourite game for at least a couple of months. It was a simple shooter that challenged you to bring down wave after wave of enemy fighters with your machine guns and lock-on missiles. It wasn’t really a great game but the basic shoot ‘em up mechanics were solid enough and it was definitely action-packed.

The original God game, Populous was all about guiding your civilization to glory against other nations under lesser deities. You started with a basic ability to manipulate the landscape and by building up Manna you could unleash earthquakes, create knights to smite your enemies and use floods and volcanoes, amongst other things. It was a ground-breaking game from Peter Molyneux (then at Bullfrog).

Easily my favourite game on the Atari ST, Speedball 2 was violent sporting perfection. It was essentially a no-holds barred game set in a court with various ways of scoring beyond the traditional goal. The first game was good but the second one increased the team sizes and added some great scoring options. You had to guide a new team, Brutal Deluxe into the big league for ultimate glory. You could boost your player’s armour and abilities or you could buy in big name stars. It was fast, furious and incredibly addictive. I used to play this game until my hands seized up.

This is the last game I can remember playing on the Atari ST. It was a really immersive platformer with great graphics and sound. You played as Hercules and agreed to get rid of the usurpers who had invaded the citadel of the Gods in return for your own ascension. It had elements of shoot ‘em up and some fiendish puzzles and your timing had to be perfect, you might even say Godlike, if you wanted to complete it.

That’s it for the Atari ST, had to be 11 because 10 wasn’t enough. I’m off to track down some of these games. Post a comment and let us know if you remember any of them.