Warlock: Master of the Arcane Review

The original Majesty game offered a welcome twist for the RTS genre. Hiring a bunch of mercenary heroes and desperately bribing them to kill a multitude of monsters was a whole new kind of challenge. The developers Cyberlore Studios apparently planned a sequel but couldn’t secure a publisher and so after the expansion pack in 2001 it lay dormant for a few years. 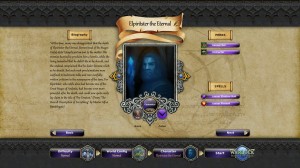 It was pleasing when Paradox bought up the rights and had Russian developer 1C create Majesty 2 which was released in 2009. Many critics wrote it off as buggy and overly difficult but it was a seriously addictive game and a decent challenge for RTS fans. The land of Majesty is Ardania, a kind of fantasy world filled with all manner of monsters, from zombies and vampires to trolls and dragons. Paradox have apparently decided to release a bunch of games based on the same world and so we got Defenders of Ardania developed by Hungarian developer, Most Wanted, and now we get Warlock: Master of the Arcane from Ino-Co Plus who seem to be another Russian dev studio under the 1C umbrella.

Forget the muddled tower defense gameplay of Defenders of Ardania, Warlock: Master of the Arcane is a much more ambitious game. This is turn-based strategy on a grand scale as a bunch of grumpy wizards go head to head for dominance over a monster filled land of magic and mayhem. You can choose your warlock of choice from a bunch of pre-generated avatars or create your own; they each have specific powers or bonuses to offer.

The races – humans, undead and monsters will be familiar from the Majesty games. You’ll also encounter a wide range of hostile monsters on each map from armoured bears to giant spiders.

Your aim is to conquer the world. There’s a hex grid and you start with one city which you must turn into an empire. To grasp it quickly just imagine a war focused, scaled down, fantasy version of Civilization V. There are four victory conditions – you can beat all your opponents, kill an avatar (sent by the Gods), take control of all of the Holy Grounds or complete all the spell research and cast the Unity spell.

As you progress the trick is to balance your resources – gold, food and mana. You’ll want to ensure that you can continually churn out armies to defend your cities or conquer new territory. War is completely unavoidable because the diplomacy system is virtually non-existent so just plan to fight your enemies regardless of the victory condition you are pursuing.

There’s a decent choice of buildings although they don’t always have the same logical sense that a game based on the real world does. As your cities grow you’ll get the option to build more and to recruit troops if you have the right buildings. Since battle is unavoidable you’ll probably end up with a mix of races in your army as you conquer enemy cities and gain access to their military buildings.

Combat is exactly like early Civ V games. Each unit can only occupy one hex and ranged units can fire over distance. You’ll want to build a decent sized army before attempting to take a city and maneuvering it into the right slots is important. Cities have a weak inbuilt defense and you can obviously station one unit to defend them. There’s no substitute for experience and you’ll find that your troops will develop loads of bonus abilities, growing significantly tougher the more action they see. 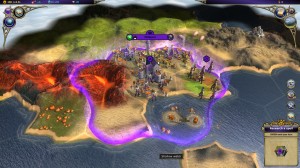 Apart from the fantasy overlay there are thankfully some other differences that set Warlock apart from Civ. Instead of having a research tree to boost your society you have a magic tree that allows you to research spells. These are all direct actions that you can perform on the map and they mostly relate to boosting your troop’s strength, killing enemies or summoning extra troops. Used correctly they can definitely sway the course of a battle but you’ll need plenty of mana.

At the start of each turn you’ll get a series of icons stacking on the right that reveal your outstanding tasks. You’ll have to deal with these before you can move on so it’s a good failsafe to ensure you don’t forget anything.

One other oddity is the presence of portals that lead to foreign lands. They are always completely monster filled so make sure you are mob-handed if you intend to go through. They do increase the exploration possibilities which is always fun and there are rewards to be had if your explorers are tough enough.

Having played Civ V a lot there’s no escaping the fact that Warlock: Master of the Arcane borrows from it heavily; in fact it steals from it liberally. It lacks the depth but it does introduce some more interesting tactical battles to the warfare as the different races have genuinely different strengths and weaknesses and then there’s the addition of spells. The focus is inescapably on combat and you’ll find that a constant state of war seems to be the norm, so if that doesn’t appeal then it’s probably best avoided.

The battles can feel like a bit of a slog and that boring end game when victory is in sight but you have to mop up the remains of your enemies to win feels inevitable. The barbarian-like monsters are seriously tough as well, I had terrible trouble with armoured bears attacking my undefended rear and even snatching a city at one stage.

The backdrop is good – I’m a fan of Majesty so the Ardania monsters and the familiar Connery impersonating advisor are welcome touches. It looks quite good, it’s very accessible and it’s only £15. On the other hand it is all about combat, you can build cities but it just feels like a means to support your army and the spells are just directly aggressive or defensive. Initially it hooked me in but the novelty is wearing off fast.