If you’ve been promoted straight up the leagues in successive seasons and you have a small club like Stalybridge Celtic then you’ll be disappointed to learn that any money you manage to generate is swallowed up by the requirement to expand the stadium for entry to the next league. A slight wage budget increase was all I got to take on the npower League 1 after winning the npower League 2, and so I had to sell some players.

Once again I put everything into wages and only signed free transfers and loan deals. The start of the season was a total disaster and the gulf in class was obvious. It was only by making a couple of key loan signings that we started accumulating points.

The players that stood out with good averages over the season were:

The key signings were Andrew Wright, who brought some experience into the defence, but also ate a large portion of the wage budget. Bram Splinter was downright immense – the defensive midfielder on loan from Liverpool gave our defence the cover it desperately needed. Kyle Hutton worked his socks off as a ball winning midfielder in the middle of the park. Gyliano van Velzen proved to be a goal-scoring assist machine on the left wing.

Some of my existing players continued to improve and made the step up without a problem, Bihmoutine, Tsovolos, Veseli, Lopez, Telfer and Naismtih were all good. The most improved was definitely Lukasik in goal, who saved us on countless occasions.

I had most success playing counter attack 4-1-2-2-1 with two wide advanced wingers (van Velzen and Lopez). I continued to switch to 4-1-3-2 for most of the home games. The big problem was scoring goals. Naismith was top scorer with just 10 goals all season. The whole midfield chipped in and I rotated a string of useless strikers, some free transfers and some loan deals. Free transfer Stephen McAuley was probably the best of a bad bunch. On loan Marcello Trotta from Fulham was definitely the worst. 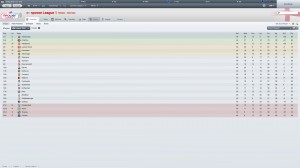 In the end we won the league with 96 points, 6 ahead of Charlton in second, although Charlton were top virtually all season and we only caught them after they collapsed in the last few matches. We beat them away from home with four matches left and they lost or drew all their remaining games.

So on to the Championship but once again all our cash has been swallowed by a stadium expansion and we have to ground share with Oldham at Boundary Park. This season is going to be really tough. I don’t think another straight promotion is on the cards unless we can get some seriously awesome loan deals.