It’s taken a while to find the time to finish off the English Hero achievement, but this Christmas holiday finally saw my Stalybridge Celtic side promoted to the Premiership. As expected winning the Championship was beyond us and in the early part of the season it didn’t look like we’d be getting anywhere near the top end of the table.

I squeezed as much money as I could from the board by promising a promotion challenge, but the stadium expansion made things very tight. I ruthlessly transfer listed all the players on the biggest wages and anyone I doubted would make the step up. As usual I edited the budget to put everything into wages and signed free transfers only.

The early part of the season was horrible. A threadbare squad struggled to accumulate points and I didn’t manage to sign enough players before the window slammed shut. Loan deals saw us scrape through with a few home wins and draws until mid-season when the stadium expansion was finished and we managed to sign in some quality.

The players who performed were: 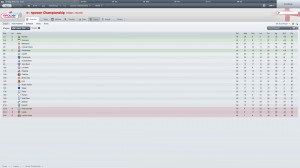 I sold some of my League 1 stars to fund new players. The star of the season was El Ghanassy as a left winger. He got goals, assists and plenty of man of the match awards. Baxter gave us some quality up front and Tade was a decent target man for support. Jenkinson and Mkoyan were huge signings for the defence and Fernandez and Cattermole came in to catapult us up the table in the second half of the season. Having taken him on loan for three seasons in a row we were finally able to sign McKee.

Bihmoutine continued to perform despite having awful stats and not being rated by my coaching staff. Veseli, McKee and Lopez also all made the jump as their development seemed to keep pace with our promotions. I signed Finnish international goalie Fredrikson, but he was a disaster and I ended up reverting to Lukasik.

I tried playing 4-1-3-2 and 4-1-2-1-2 diamond formation at home, but it was 4-1-2-2-1 with a trio of defensive midfielders and two wide wingers that really worked for us. We became a devastating counter attacking side and picked up loads of points that we probably didn’t really deserve against tougher opposition. Thanks to an awesome late run we finished 5th with 78 points to secure a play-off place.

We got Crystal Palace in the semi-final and the first leg lulled me into a false sense of security as we romped to a 3-0 win. We went into the away leg over confident and ended up 3-0 down at half time after two weak goals and a truly horrible own goal from stand-in left back Cintolo. As the minutes ticked away our defensive hero Mkoyan came up to score a header from a corner and we sat on it, hanging on by our fingernails to get the aggregate win.

The final paired us with an in-form Blackpool who had finished five points ahead of us in third. We set up to counter attack and tried to hit them on the break after each attack. It was actually end to end stuff, but plenty of missed chances for both sides. Eventually Veseli broke the deadlock just before half-time with a headed corner and Blackpool couldn’t get back into the game. We won promotion and Veseli was voted player of the year by the fans.

That was it. English Hero achieved. I took Stalybridge Celtic from the Blue Square North to the Premiership in five seasons. The board has borrowed £22 million to build a new stadium and they’ve actually given me some money to spend. Let’s see how long it takes to win the Premiership.