Sometimes you just feel like wiping out the human race entirely, don’t you? Slaughter every last one. Free the planet. We all feel it, especially on Monday mornings. In Plague Inc that’s the idea. Can you create a plague that spreads, infects, and kills every last human being on earth before a cure is developed?

A few years ago, 2007, to be precise, I got addicted to a wee game called Pandemic. It was a browser-based flash game that challenged you to create a pandemic that would wipe out humanity by choosing various symptoms and abilities. The formula was greatly improved by Dark Realm Studios in Pandemic 2 and we spent many a happy lunch hour at my old work competing to see who could spark the apocalypse fastest.

I actually thought that Plague Inc. was a port, but it’s more of a spiritual successor. An Android and iOS game that bears more than a passing resemblance to Pandemic 2, but looks a bit slicker and has a few new features. It is every bit as perversely satisfying to play and extremely moreish. 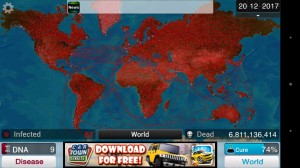 The main challenge of the strategy is to ensure that you spread your plague to every corner of the globe before countries start shutting down the airports and shooting all the pigeons. In Pandemic it was always Madagascar that held out, but your nemesis in Plague Inc. is Greenland.

You’ll choose a type of plague, bacteria, virus, fungus, parasite, prion, nano-virus, or bio-weapon. You’ll need to succeed with one on at least Normal difficulty to unlock the next, unless you’re open to spending on IAP. There are some extras available if you spend, enabling you to modify the genetic code at the start (they’re basically buffs), but you don’t need them.

Pick a country for your plague to start in and you’ll accumulate DNA points as the infected numbers rise. These points can be spent on transmission (ways of spreading the plague), symptoms (to spread, incapacitate, and kill faster), and abilities (making your plague hardier and tougher to kill).

The first question you have to answer is “Which country should I start my plague in?”

With a bacteria or virus it’s relatively easy to spread, so you can afford to start somewhere that will spread it fast. India and Egypt have worked best for me because both have airports and seaports and they are poor.

If you’re starting with something tougher to spread, like a fungus, then pick one of the toughest nations to infect, like Greenland or Madagascar.

Developed nations like the U.S. have better medicine and that slows the early rate of infection, but I have had success starting plagues in the UK or Germany, you just need to develop the Drug Resistance ability fairly early on. 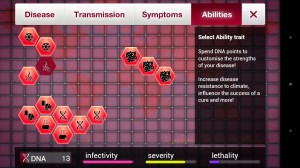 Spreading the plague under the radar

In order to win the game you will need to infect everyone on the planet and then kill them. This should be viewed as a two-step process. Infect first and then turn your attention to killing. If you allow your plague to become too deadly too quickly it can end up killing people before they have a chance to infect anyone else.

The trickiest one to spread is the fungus. You should start by spending DNA points on Water and Air transmission and maybe Livestock if you picked a rural country. Don’t waste points on the spore release just be patient and try to max out water and air, so you can get the Bioaerosol ability, which will enable the fungus to travel overseas more often.

I usually develop multiple transmission types to spread the plague faster. Livestock for rural countries, Rodent for cities, and Birds will spread it across borders when they migrate. The only trouble is that each transmission type increases the chance of mutation. 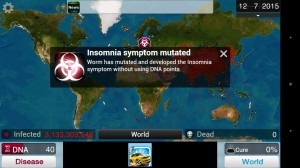 Greenland is the hardest country to infect and your plague will spread slowly there even once it’s in. Develop Cold Resistance 1 and 2 to speed it up dramatically.

Later in the game you’ll need to develop Symptoms that will kill infected people, but early on all these do is alert the authorities and get them working on a cure so every time you get a new symptom mutating go into the symptoms menu and tap on it and select Devolve. You’ll gain two DNA points and the plague will keep spreading unnoticed. You want to wait until you get the message popping up to tell you that “There are no healthy people left in the world” before you start to develop symptoms. 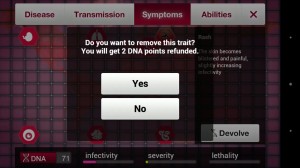 There are a few other ways to fight the discovery. Parasite offers the Symbiosis ability which makes it less likely to be noticed, for example. But if you have the patience it’s best to wait it out until everyone is infected and then start developing deadly symptoms.

If they do start on a cure then I like to develop Insomnia and then Paranoia which makes people less likely to seek medical help and slows down the cure effort. You can also spend DNA points on Genetic Hardening and Genetic Reshuffle, but they are very expensive.

The other way to go once the whole world is infected is to just make your plague super deadly. If you’ve gone the paranoia route then Inflammation and Seizures are a good next step and Insanity will slow things down further and encourage countries to fall. You can also go for Coughing > Pneumonia > Pulmonary Oedema > Pulmonary Fibrosis > Total Organ Failure > Coma. 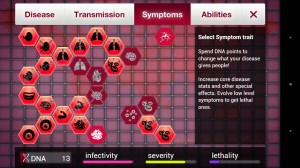 Remember that you can devolve some of your abilities and transmission boosts in the end game if you need points to develop more symptoms. Once everyone is infected you don’t need to worry about transmission so much. If it’s a fungus and you used the spore release ability then you can devolve those for points.

You’ll be able to tell pretty quickly looking at the death rate whether you’re going to beat the cure, there’s a tipping point where game over for the human race becomes inevitable. 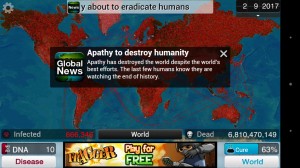 We’ve reached the end of my Plague Inc tips, if you want to add any then post in the comments.